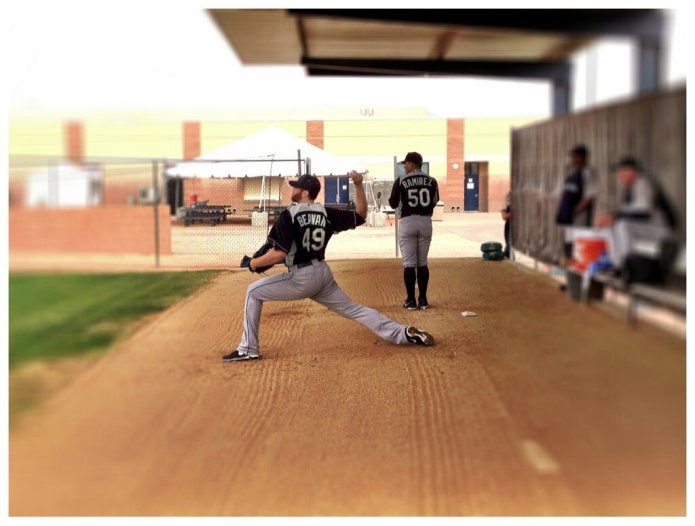 This is the final entry in my Spring Training report series. I’ve already covered the starting rotation, the infield, and the outfield. This week I’ll cover the bullpen. The bullpen has to be seen as a strength on this team, it’s balanced and cheap. There are also a few up and coming young guns who should provide a ton of value to the team for the next few years.

Whenever we’re talking about relievers, the name of the game is volatility due to small sample size. They, more than any other position, are subject to wild swings in performance from year to year. Someone who was dominant one year (ahem, Brandon League) can look like chopped liver the next year. For the most part, their underlying skills can carry over from year to year but their results may change. This makes predicting their performance a nightmare. The projections I’ve included here are just a simple average of three projection models (ZiPS, Steamer, and my own) to get as balanced a projection possible. Let’s see what the Mariners are working with.

The Bartender begins 2013 as the undisputed closer for the Mariners. He came on strong last year after years of toiling in the minors. He developed a knockout curve that became a huge weapon that complimented his mid-90s fastball. His ability to locate that curveball in the strike zone allowed him to keep hitters off-balance and rack up high strikeout numbers. After becoming closer last year, his walk rate jumped up a tick so that’s something we should watch for this season. Wilhelmsen is also 29 years old, which could make him potential trade bait this summer if the Mariners want to see how their young guns will handle high leverage situations.

Working the eighth inning, Charlie Furbush has developed into a reliable bridge to Wilhelmsen in the ninth. He has a low-90’s fastball that is complimented by a curve and a slider. He’s always been able to get lefties out and the development of his curveball has allowed him to improve against righties. He’s been stretched out as a starter before, so he could also provide depth for the rotation in a worst case scenario.

Now we come to the exciting part of the bullpen. Both of these guys are young, flamethrowing righties who tasted the majors last year. Carter Capps is the more exciting relief prospect and probably the Mariners closer in waiting. He made the jump from AA-Jackson to the majors last year. He throws in the high-90s, even topping 100 every once in a while, with a developing curveball and a show me changeup. He will be counted on to handle difficult righties in high leverage situations to start the year, eventually moving to a full-time setup role and then closer.

Stephen Pryor also throws in the mid-90s complimented by a frisbee slider and has been working on a curveball this spring to add to his arsenal. His high walk rate will probably limit him to middle relief this year. Should he continue to develop, his peak is probably as a setup man and part-time closer.

Oliver Perez and Lucas Luetge will be counted on to get tough lefties out this year. They both have a strong fastball-slider combo (a strong theme for the entire bullpen) and have held lefties to a paltry .206/.304/.306 line combined. Righties have hit .278/.390/.451 off them so they should only be counted on for a few outs per game strictly against lefties. Expecting anything more from them is setting the bullpen up for disaster. It looks like the projection models don’t fully believe in Perez’s resurgence as a reliever. I would expect him to beat his projection and closely match his rate stats from last year.

Right now, Kameron Loe will most likely be taking the last spot in the bullpen. Loe was signed to a minor league contract this offseason after a rough year in 2012 with the Brewers. He throws a plus sinker and a plus slider, resulting in a high groundball rate but pretty extreme lefty-righty splits. His down season last year was driven by an unusually high BABIP and HR rate. His projection calls for a regressed HR rate so hopefully he can be counted on in low leverage situations or long relief.

Josh Kinney hurt his shoulder during spring training and will start the year on the 60-day DL. It remains to be seen whether Kinney will get his old job back when he returns or if he will be stashed in AAA-Tacoma as depth. If he does return, he’ll bring a strong fastball-slider combo that has strong platoon splits against righties. Kinney’s projection calls for the lowest strikeout rate of his career, if he does find his way back to the bullpen, he’ll blast that projection out of the water.