The first question my friends asked me after seeing The Last Jedi on opening night was, “Did it go the way you expected?” After stumbling over some incomprehensible words, I couldn’t come up with an answer. Not because I had a hard time following the film or enjoying it, rather, because the film Rian Johnson created is completely unexpected and yet embraces the established mythos of the Star Wars saga.

END_OF_DOCUMENT_TOKEN_TO_BE_REPLACED 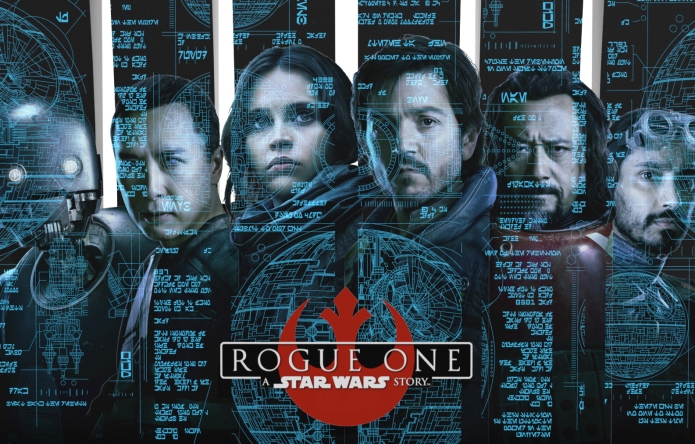 Last December, we were transported back to a galaxy far, far away and were reacquainted with some familiar friends. For some, The Force Awakens was a little too familiar, as though J.J. Abrams and Co. we’re treading on hallowed ground. It was an almost impossible challenge facing Abrams; trying and meet the massive expectations of a rabid fan base while telling a new story in a complex mythos. To his credit, Abrams delivered a thoroughly enjoyable film that extended the Skywalker saga for a new generation. But with all these things in mind, it’s no wonder he played it safe by sticking close to the original trilogy in tone and structure.

Rogue One was a much riskier proposition. Director Gareth Edwards was tasked with creating the first Star Wars film unconnected to the Skywalker saga. This required a film with an entirely different structure, and since it was a direct prequel to A New Hope, it needed to be steeped in the sights and sounds of 1977. Moreover, this film had to prove that stories unconnected to the Skywalker saga were worth telling.

Rogue One is a triumphant addition to the Star Wars universe. Not only does it add layers of depth to A New Hope (an almost 40-year-old movie) but it also serves as connective tissue between the prequel trilogy, Star Wars: Rebels, and the original trilogy. It does all this while telling a gripping and inspiring story about the fledgling Rebel Alliance.

The most compelling message found in Rogue One echoes a line from last year’s The Force Awakens. As Finn is rescuing Poe Dameron from the clutches of the First Order, Poe asks him why he’s doing what he’s doing. Finn responds, “Because it’s the right thing to do.” This theme—doing the right thing in spite of the circumstances—is what drives our characters forward in Rogue One. For our main heroine Jyn Erso, it’s easy to see how she’s inspired to do the right thing during the course of the movie. A glimmer of hope, her father’s love, and the full reality of what the Empire is capable of is all it takes to push Jyn back into the fray.

Ultimately, the film isn’t really about Jyn Erso though. Its true poignancy lies with all the other characters around her. Rogue One is an homage to the unknown soldiers, the X-Wing pilots, and the cargo haulers. These background characters—some even have names like Chirrut, Bodhi, or Baze—are all thrown into the middle of this galactic conflict. They’re not heroes like Luke Skywalker; they’re not going to save the galaxy by defeating Darth Vader or the Emperor (which is made plainly clear in the final scenes of the movie). But each one of them makes a choice to do the right thing, to defy the inescapable oppression of the Empire. And though none of these characters survive their suicide mission, their small individual contributions are collectively vital to the greater Rebellion and inspire great hope in others.

The title of Episode IV (A New Hope) certainly points towards Luke’s role as the last Jedi but now it gains an entirely new layer of meaning. The entire Rebel Alliance, fractured and on the edge of despair towards the beginning of Rogue One, draws on the heroic sacrifice at Scarif to rally in the face of mass destruction and terror. I think that’s why Rogue One is so successful. It’s a story about how the collective actions of a few determined people can inspire hope for the galaxy. It’s a story about you and me making a choice to do the right thing in the face of terrible circumstances.

Lucasfilm and Gareth Edwards unquestionably proved that there are compelling stories to tell in a galaxy far, far away. The Skywalker saga will always give us the epic conflict of good versus evil. These new stories will help fill in the gaps, whether they’re stories about the little guy like Rogue One or origin stories like the forthcoming Young Han Solo film. The Star Wars universe is ripe for new and different themes and narratives. I’m excited to see what Lucasfilm can come up with next.

A few years ago, a dear friend moved across the country to begin attending grad school. I even road tripped across America to help him transition from one coast to another. The thing is, what was once an almost daily friendship was now punctuated with frenzied visits once a year. Sure, we would talk on the phone or via Skype, we’d play SimCity together, and text each other, but it just wasn’t the same. Thankfully, when we were together, on the same coast, it felt like no time or distance had separated us at all. We’d tell the same kinds of jokes, laugh at the same kinds of things, and talk about all the same topics. We’re able to pick up right where we left off.

Watching Star Wars: The Force Awakens was a lot like catching up with that friend who rolls into town every once in a while. All the same sights and sounds were there, just like I remembered them. Even the same jokes were told, though there were far more laughs at some of the new ones. Certainly the trappings and the setting were different but it felt good to be reacquainted with this galaxy far, far away.

END_OF_DOCUMENT_TOKEN_TO_BE_REPLACED

I loved Star Wars: The Force Awakens. And what a relief too. After years of anticipation and apprehension, we finally witnessed J.J. Abrams’s vision of the future of a galaxy far, far away. His contribution was a worthy addition to the Star Wars universe that holds up well on its own and within the larger context of George Lucas’s saga. The prevailing theme in The Force Awakens is legacy and any discussion of this film must address what came before.

END_OF_DOCUMENT_TOKEN_TO_BE_REPLACED

With the release of the final trailer yesterday, the hype machine for the newest entry into the Star Wars saga is at full power. I’ve been guarding my anticipation, making sure to keep my expectations at a healthy level. I’ve tried my hardest to avoid spoiling the movie and have steered clear of the rumor mills. The reactions to The Force Awakens have stretched from unrestrained excitement to tentative curiosity to indifference. And I think the continuum of these responses is tied to your opinion of the prequel trilogy.

END_OF_DOCUMENT_TOKEN_TO_BE_REPLACED

The following is a dramatization of a game of the Star Wars X-Wing Miniatures Game by Fantasy Flight Games.

The swirling, blue miasma of hyperspace was particularly entrancing today. I couldn’t even remember the time of day. With all of these scouting missions, I had hardly slept a wink in the past few weeks. “Put the Rebellion before yourself, Aden,” Commander Narra had told me, “Put the Rebellion before yourself and you’ll do alright.” Not the most encouraging advice I’d ever received but it had served me well over the past few weeks.
We were on our fifth scouting mission in four days. I was piloting my X-Wing and was accompanied by my wingman, Matthias Tallon in his own X-Wing and Dash Logoth piloting a Y-Wing equipped with survey equipment. We were on our way to another uncharted system, searching for a location for the Rebel Base that had been displaced from the Yavin system after the destruction of the Death Star. The leaders of the Rebellion were looking for a system that was near a major shipping lane but unknown enough to escape drawing any attention.

END_OF_DOCUMENT_TOKEN_TO_BE_REPLACED

I can remember the very first time I saw Star Wars. I was hanging out with my neighbor, who was a few years older than I was and we were looking for a movie to watch. He asked if I had seen this movie called “Star Wars.” On the cover were three characters holding laser guns and a dark looming figure in the background holding a laser sword. Surrounding these characters were robots, spaceships, explosions, and what looked like Bigfoot. I had no idea where I was about to be transported. Two hours later, I was in love.