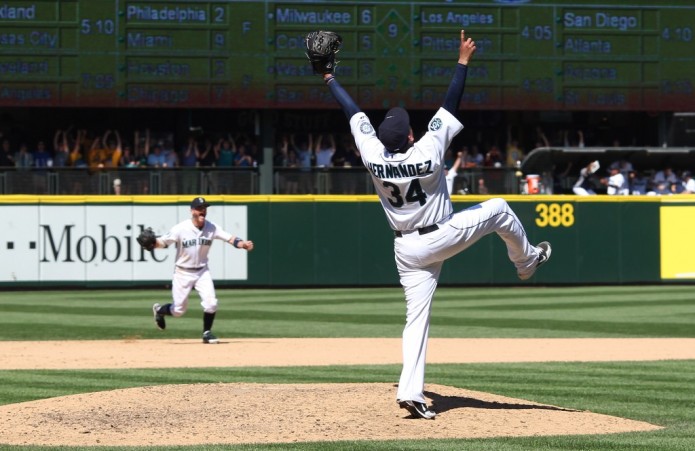 The chant rises out of the din of the stadium. A sea of yellow cards start bobbing up and down. Men in chain mail, Elvis and Michael Jackson impersonators, and those with thick, fake mutton chops join in.

The King looks in towards home plate, gets his sign, winds, and throws. Those clad in yellow wait with bated breath as the ball speeds towards the catchers mitt.

Pandemonium. The cheering only gets louder.

The King’s Court is unlike anything else in baseball. When you’re sitting with hundreds of your courtesans, chanting for a strikeout every time there are two strikes on an opposing batter, it’s hard not to believe there is some tangible effect you’re having on the outcome of the game. Baseball is a tough game for the crowd to affect. Each play occurs separately and the crowd is often reacting to the play that has just finished on the field. It’s not like Soccer or Basketball where the momentum of the game can swing from side to side and the crowd plays a large part in that swing. The common belief regarding home field advantage in any sport is that it does not provide a positive effect on the play of the game but, instead, favorable treatment by the officials calling the game.

Many have looked into the effect of home field advantage in baseball. The baseball blog Beyond the Box Score looked into home field advantage, specifically with the strike zone in mind, and found that there is little evidence to suggest any influence on the game. FanGraphs ran a similar post where Dave Cameron advocated for home field advantage have a more significant effect. After the Pirates won the Wild Card playoff game last year with a loud and rowdy crowd at home, Jeff Sullivan wondered if that type of crowd, so unfamiliar to a baseball stadium, could have had a larger effect than normal.

Along the same lines as Jeff Sullivan, I wonder if the Kings Court could have a larger effect on the outcome of the game than a normal crowd at a baseball game.

To find out, I compiled a number of data from Retrosheet, FanGraphs, and Baseball Reference.

The first King’s Court was on May 28, 2011 for a game against the Yankees. This gives us two large samples to work with. As you can see, Felix’s home strikeout rate has increased from just under 23% to over 25% during the King’s Court Era—a good sign for our hypothesis. But, this could be explained by the increased strikeout rate league wide in the past few years. We could also be seeing Felix’s skills developing further and therefore increasing his strikeout rate despite the presence of the King’s Court.

We also have to take into account the way the King’s Court is most likely affecting the outcome of the game, favorable calls by the umpire. Since the “K!” chant only occurs when there are two strikes. According to FanGraphs, during the King’s Court Era, when Felix has two strikes on a batter, he strikes them out over 50% of the time! Wow, that’s an incredible rate. But it doesn’t really tell us if the umpire was affected by all that chanting, we have to look at the rate of called strikeouts so that we’re not influenced by swinging strikeouts.

I’m not sure we can say for certain whether the King’s Court has had an effect on Felix’s called strikeout rate this year. The data tell us that there probably wasn’t an effect in the first two years of the King’s Court Era so I’m not sure what—if anything—is different. I think we can call our hypothesis remotely plausible but certainly not proven.

A few notes from the data I curated:

One thought on “The King’s Court and Home Field Advantage”