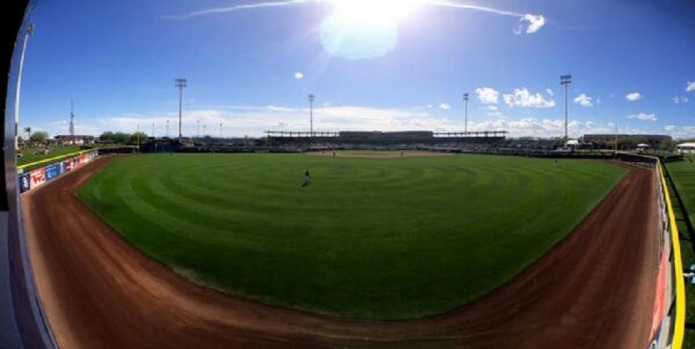 The 2014 Seattle Mariners roster preview continues as we switch from position players to pitchers. I’ve previewed the infield and the outfield already, now we take a look at the starting rotation. In the past few days, the Mariners’ starting rotation has taken on a completely different look but the lingering question marks remain. Some lingering injuries have forced the Mariners to scramble to fill out the back end of their rotation. A few veterans who were looking to crack the rotation were in camp with the Mariners this spring ended up being cut. A veteran, who was in camp with another team, was brought in to join a pitcher who hasn’t pitched above Double-A for spots number 4 and 5 in the rotation. It seems eerily familiar to last year. This could be another boom or bust year for this position group–a common refrain for this team–as they surround a star with a group of unproven youngsters. Starting Rotation

On Monday, the Mariners released Scott Baker who was hoping to crack the starting rotation after missing the last two years after multiple injuries. This spring proved that he wasn’t fully recovered, he had just one strike out in twelve innings with seven walks and an ERA of 6.75. The very next day, the Mariners released Randy Wolf, another veteran who was hoping to make it back after an injury-plagued season last year. With those two gone, it seemed like Blake Beavan and Roenis Elias will fill out the back of the rotation while the Mariners waited for Hisashi Iwakuma and Taijuan Walker to recover from their own injuries. Luckily, the Mariners realized that Blake Beavan should never be a part of a major league rotation and went out and signed Chris Young, who was recently cut by the Nationals. With all of those transactions behind us, the initial rotation is set. Felix Hernandez returns as the undisputed ace of the staff. He’s established a pretty consistent performance profile despite lower average velocity on his fastball and a changing pitch type distribution. There’s not much else that hasn’t been said about Felix already. I’m just excited for Felix Days every five days. Erasmo Ramirez will slot into the second spot in the rotation. He’s had an excellent Spring Training this year (20/2 K/BB, 1.14 ERA) and finally looks healthy after dealing with injuries the past few seasons. After a disappointing year in 2013, he’s made some adjustments to his approach. He relied on his slider more than ever last year and it took away from his best pitch, his changeup. In 2012, his first year in the majors, he threw his changeup 22% of the time, last year that dropped to 15%. All of the reports out of Spring Training have him relying on his changeup as a weapon instead of his mediocre slider. James Paxton slides into the third slot and hopes to build on his excellent debut last year. Last year saw Paxton vary widely in his performance in Triple-A. He started the year with some decent but erratic games but began to lose his control during the summer. He regained his control by the end of August and dazzled in his four starts in the majors in September. The key for Paxton will be maintaining his control and building consistency with his mechanics. So far this spring, he’s been able to do that, he’s given up just 3 walks in 17 innings to go along with 12 strikeouts. Roenis Elias has emerged from the pack to round out the rotation as the fifth starter. He’s a relative newcomer to the organization and hasn’t pitched above Double-A. The fact that he’s actually pitching in the major leagues is a pretty amazing story. He had a 3.18 ERA with a great strikeout rate last year and has had a decent spring this year. He relies on a fastball that sits in the mid-90’s and a looping curveball reminiscent of Tom Wilhelmsen’s big curve. He’s developed more consistent mechanics which has benefited his release point for all of his pitches. When he was still raw after coming out of Cuba, there were reports of him having a different arm slot and release point for each of his pitches. Obviously, major league hitters would be able to key in on something like that so we’ll have to see if he’s able to maintain these mechanical changes to start the year. Injured, Returning Soon

Luckily for the Mariners, the starting rotation will soon get two important pieces back from injury. Both Hisashi Iwakuma and Taijuan Walker are projected to be fully healed by the end of April and should slot into the rotation as soon as they’re ready. I’d expect Roenis Elias to be sent to Triple-A and Chris Young to move into a long relief role once both of them are back. Iwakuma is coming of a career year in which he placed third in the Cy Young voting and solidified his place at the top of this rotation. Last year’s success was built off a low BABIP and a remarkable ability to strand runners on base. Both of those abilities we’re outside of the norm so we could expect some regression to the major league average. However, his swinging strike rate and contact rates would project a higher overall strikeout rate. Walker’s debut last fall was just as exciting as Paxton’s, a young pitcher who has sat atop prospect lists for the last few years finally making his major league debut. He’s dealt with some shoulder discomfort this spring and the Mariners are understandably being as cautious as possible with one of their prized arms. Walker will stay in Arizona to make a few more minor league starts and should be fully ready by mid-April. I wouldn’t be surprised if the Mariners keep Walker in Triple-A to start the season to fine tune his approach but I’d expect to see him in the majors by June at the latest. Depth

Let’s hope that it doesn’t come to these two. Maurer had a disaster of a year last year but we could have seen that coming. He made some strides forward towards the end of the year but he still needs to develop his changeup to offset his huge platoon split. If he’s unable to make progress, I could see the Mariners transitioning him to the bullpen.