In the past few weeks, we’ve had two high profile celebrities decide to publicly declare their sexual orientation. First was Michael Sam, a All-American football player from the University of Missouri. Sam joins a number of professional athletes who have outed themselves–joining Robbie Rodgers of the MLS and Jason Collins of the NBA–and is poised to become the first openly gay player in the largest, most popular professional sports league in America. The second was last Friday, when actress Ellen Page outed herself during a speech at a conference in Las Vegas. Page is primarily known for her roles in Juno and Inception. Both of these announcements are interesting case studies of the intersection of the public and private.

It’s a wonderful coincidence that Ellen Page will be reprising her role as Kitty Pryde/Shadowcat in X-Men: Days of Future Past this summer because when Sam and Page announced their sexual orientation publicly, my thoughts immediately jumped to comic books. I know, my nerd glasses color everything around me. A secret identity is a theme central to a number of comic books–characters like Batman, Superman, and Spider-Man all have alter egos that remain hidden from the public. Yet, there have been a few times when a super hero has revealed their secret identity. In 2006, during the Marvel event, Civil War, Spider-Man publicly revealed his secret identity: 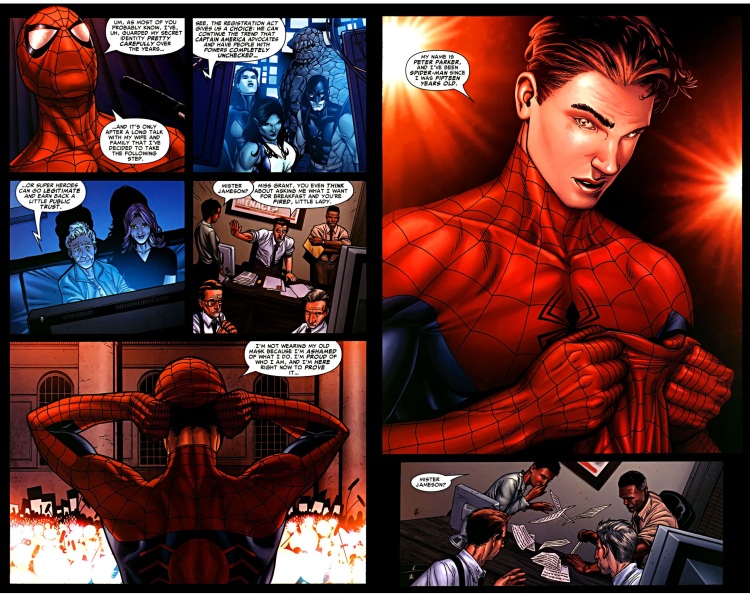 Super heroes and their secret identities are particularly interesting when considering the announcements from the past few weeks. Characters like Batman and Spider-Man rely on their secret identities to keep their life as a super hero separate from their regular lives–they have a public face and a private face. Some of the best super hero stories stem from this tension between the public and the private, stories like Infinity Crisis, Batman: Death of the Family, and Spider-Man No More. These stories are captivating because all of us can relate to a tension between the public and the private. All of us have things we keep to ourselves in our private world while we present a certain persona to the public world.

Matt Barnes wrote an excellent piece on the tension found between the public and private world. He looks at identity through the lens of gay culture. Here’s the crux of his argument:

The person is known outside-in. Her unknowable subjectivity — her unique, unrepeatable first-person experience of existence — is expressed through her objectivity — what she does, what she says, her outward splay of characteristics, gestures and expressions. Her smile is a two-fold reality, that is, the objective expression of a subjective disposition — the partial and uncertain outward revelation of an interior hiddenness. A person’s objectivity, properly speaking, is always an invitation to an encounter with her subjectivity.

(Seriously, if you’ve got a few minutes, go and read that piece, its awesome)

There is a dissonance between the interior, private world and the exterior, public world. Only we know who we truly are beneath all of our masks and barriers we put up. We are only known insofar as we allow ourselves to vulnerably communicate our inner selves to others. But, at the same time, we are bombarded daily by our public world around us. The mass media striving to tell us who we really are and what we should do because, publicly, who we are and what we do are intrinsically linked. So what happens when someone brings something from their private world into the public world?

For our super heroes like Spider-Man and Batman, there are always consequences for revealing their secret identity. After Spider-Man revealed his secret identity in the pages above, he had to deal with an assassination attempt against Aunt May and ultimately had to make a deal with the devil to save her life (oh, One More Day, how we loathe thee). Once Spider-Man and Peter Parker became known as the same person, Spider-Man’s enemies had a brand new avenue to attack him.

While we probably don’t have psychopathic villains trying to kill us, there are real ramifications when we bring our private identities into the public sphere. Because our public identity is informed by the way we look and the things we say and do, when we bring our private identity into the light, all of our actions now become associated with that new identity. Michael Sam isn’t just a young African-American football player anymore, now he will be known as the first openly gay player in the NFL. He certainly isn’t the first gay player in the NFL, we can assume that there have been many before him, but they have kept that aspect of their identity in their private life. Now Michael Sam will be facing and entirely different set of challenges and reactions. As teams are evaluating him for the draft, will his value be impacted by his sexual orientation? His teammates at the University of Missouri accepted him without issue when he outed himself last August. Will teams be hesitant to draft him to ensure their locker rooms are free from discord and spectacle? These are real questions Michael Sam is having to face because of his decision to reveal part of his private life to the public eye.

Now, I’m not condemning people like Michael Sam, Ellen Page, or anyone who publicly announces their sexual orientation. In fact, I believe that its probably one of the most vulnerable and courageous things they could do. But, why does this matter to the rest of us? To a certain degree, we all struggle with personal shame. We hide parts of ourselves because we’re afraid of rejection. We’re afraid people will see us for who we really are and push us away, or worse, bully us. This leads us to hide parts of our identity deep in our private life. We build walls and put on a show to mask who we really are. By announcing their sexual orientation publicly, Sam and Page are declaring to the world, “This is who I am. I’m not ashamed of who I am. Take me or leave me.”

As we become more deeply known by others, we grow in complexity. Our identity becomes more nuanced and we start stepping out of the box that the public might have labeled us with. No longer am I just a Christian, I’m a Christian who values these things and does these other things and all of that makes up who I really am. How are you making yourself known? Are you publicly announcing the values and beliefs you hold dear or are you covering up who you truly are with masks and barriers? Vulnerability is hard. But openly and honestly interacting with people around you becomes so much more rewarding when you can look past the labels society has created and see people for who they really are–wonderfully complex and unique individuals.

2 thoughts on “Take Me or Leave Me: Shame, Sexuality, and Spider Man”