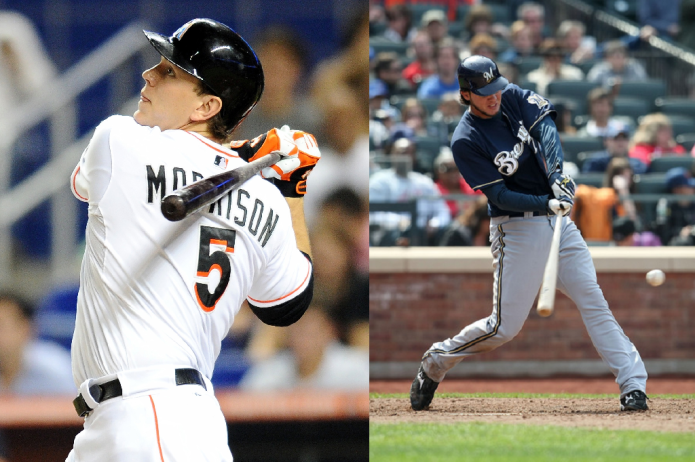 The Mariners had a busy day today, adding two players, one via free agency and one via a trade with the Miami Marlins. First baseman/outfielder Corey Hart, previously of the Milwaukee Brewers, was signed to a one year contract worth up to $13 million and RP Carter Capps was traded to the Marlins for first baseman/outfielder Logan Morrison. Both of these players have high upside and high risk/reward but their overall cost is fairly low so they shouldn’t be a burden to this team. Both Corey Hart and Logan Morrison are coming off of fairly significant knee injuries, Hart lost the entire 2013 season to his injury and Morrison has only played in 178 games the past two seasons. They’re both healthy now but caution should be used when projecting them to be in the lineup everyday. They join Justin Smoak in a trifecta of first basemen now on the roster.

Corey Hart fills a need for a right-handed bat in a lineup that skews heavily left-handed. In his last three seasons (2010-2012) he’s put up a wRC+ of 130, fourteenth highest for an outfielder over that span and around the same amount of production as Shin-Soo Choo and Nick Swisher. He’ll be 32 by opening day and is looking for a bounce back season after having knee surgery that knocked him out for the entire 2013 season. Logan Morrison was a once highly touted prospect for the Miami Marlins who’s career has been derailed due to injuries. His rookie season (2010) he had a wRC+ of 129 and followed that up with a 119 mark the next year. The last two years have been a loss because of injuries and a disappointing lack of production when on the field. He’s still only 26 and the Mariners hope that he stays healthy enough to live up to his once high potential.

Here are Hart and Morrison’s rough projections for next year along side Smoak’s.

If the Mariners keep all three, I’d expect Hart and Morrison to split time at DH and in left field with Smoak getting his last shot at first base. But, we’re not finished wheeling and dealing and I wouldn’t be surprise if either Smoak or Morrison were traded away by the end of the offseason. That might be the best option because with Hart’s balky knee, he should be playing first base or DHing, not playing in the outfield. Either way, I like these moves for the Mariners. They’re bringing in high upside players with talent without breaking the bank. Perhaps Jack Z knows what he’s doing after all.