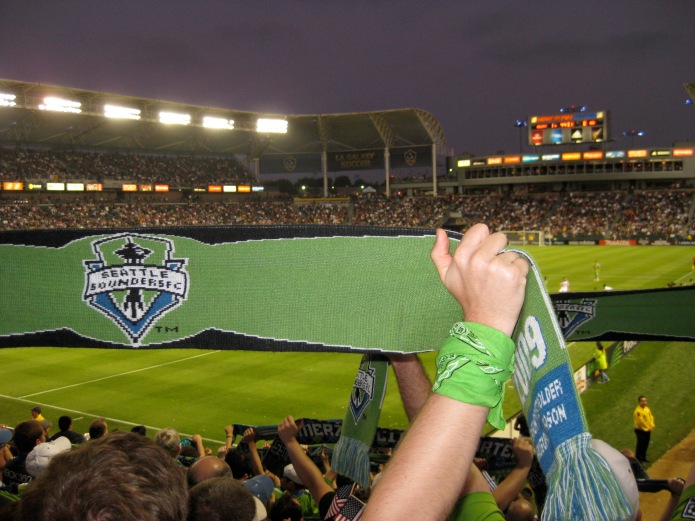 Tomorrow, the Seattle Sounders will face their darkest hour. They are facing the Los Angeles Galaxy in the second game of a two game, aggregate goal series after losing in game one 0-3. The odds are stacked against the Sounders. The LA Galaxy are one of the best teams in the league and they are playing in top form. The Sounders are reeling from a number of injuries to key players. A win tomorrow night would be historic, a Hollywood ending against the team from Hollywood.

“We will not go quietly into the night! We will not vanish without a fight!”

The darkest hour is a common storytelling device. In Star Wars, when the Rebels are assaulting the Death Star and their starfighters are being shot down left and right by the Imperials, they faced their darkest hour as Luke and his wingmen entered the trench. In the Lord of the Rings, when Aragorn and the Army of the West marched to the Black Gate and engaged Sauron’s forces to buy time for Frodo, they faced their darkest hour not even knowing if Frodo was still alive. Our heroes, in the face of certain defeat and the longest odds, clung to hope.

“There will be a day when the courage of men fails, but it is not this day.”

Seattle sports fans are no strangers to the darkest hour. In 1995, the Seattle Mariners, just barely making it into the playoffs, lost the first two games of the division series to the New York Yankees. After game two, the Seattle Mariners had just a 10% chance of advancing to the Championship Series. In game five, after winning both game three and game four, they found themselves losing 4-5 in the bottom of the eleventh inning. Then…”Swung on and lined down the left field line for a base hit…” This moment would define an entire franchise for the next 15 years.

In 2010, the Seattle Seahawks became the first team in NFL history to qualify for the playoffs with a losing record. In the first round they faced the New Orleans Saints, the defending champions, and were 10.5 point underdogs (The Saints were favored to win by more than 10 points). Late in the fourth quarter, Seattle was leading by four and desperately need a score to seal the victory. Then…”Hand off to Lynch, left side, finds a little bit of a hole and keeps his legs moving! He’s across the 45, the 50…” This moment would define a team, and a player, that was in the midst of transitioning into a new era.

The Sounders find themselves facing their own defining moment. The Sounders have had success in the past but have never won a major tournament series until this year. (The US Open Cup is a knockout tournament and has always played second fiddle to the MLS Cup and the CONCACAF Champions Cup) Just last year, the Sounders faced a similar moment and came up short. Will the Sounders build on the their past failures and overcome their obstacles? Will they cling to hope and fight through adversity? All is not lost. There is a reason to hope.

“The night is darkest, just before the dawn.”

One thought on “The Darkest Hour”