Today started just like any other day in November. It was cold and a low fog layer covered Bellingham, Washington. I started work at Logos Bible Software at 10:00 am unaware of the extraordinary events about to take place. At around 10:15, I entered the basement of building 1 with my co-worker, Mark. We saw over 50 chairs gathered together, some older and broken down, others young and still plush. It was a fairly common sight, chairs usually congregated in spaces like this. However, this wasn’t just a regular collection, the chairs had something far greater in store for us. 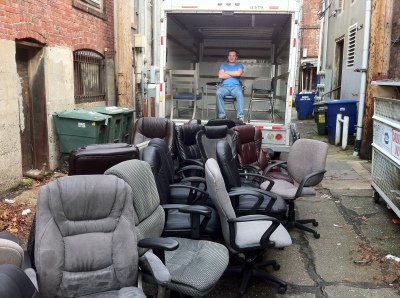 You can see in the picture, Mark sitting in the back of the truck with a multitude of chairs under his watchful gaze. This picture shows a common sight in our day and age, chair slaves being taken to market to be sold.

The caption that was posted with the picture read: “In the year 2012, the humans [have] enslaved their chair brethren and [are] Lords of the Chairs” Brandon Rappuhn posted at 10:58: “Those look nicer than the one I’ve been sitting in. Can I have one?”  One of the leaders of the slave caravan replied: “We just sold them all at the slave market [redacted]. Ask [your boss] for a new chair slave.” These seemingly common interactions would soon be met with fierce opposition.

Within minutes the twitterverse was flooded with reports of humans assisting chairs in over throwing their human masters, outraged over the practice of this barbaric system. Daniel Martell, a former Logos employee, posted at 11:02: “The Vault has been opened!! Lest we not forget this day.” It can only be assumed that he had been planning some sort of action and had spent weeks preparing for a day like today. It was unknown at the time what or where “The Vault” is but we can be certain it was integral to the rapid success of the revolution.

In the hours that followed, the slave caravan had made its way towards the Bellingham chair slave market. Information is sketchy about how the chairs managed to escape their masters. Did they have inside support? Did human bystanders become involved? All that is known is by noon, the chairs had escaped and were on the run, inspiring chairs everywhere towards freedom. This picture was posted to twitter with the caption, “Where have all the chair slaves gone?” 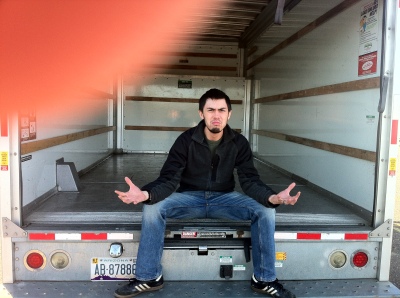 Daniel, a confirmed leader in the revolution posted this reply within minutes: “The revolution has begun! Shed your old upholstery of slavery my brethren! Don the Leather of FREEDOM!” We live in uncertain times, where freedom is valued above comfort and maintaining the status quo. The revolution has begun. Lines are being drawn. Will you stand with your human brothers and sisters or sit with the chairs?