A few months ago, I was asked to contribute to a new project at work called Picturing Scripture. The idea was to create a coffee table book out of the incredible Bible Verse of the Day art pieces our design group had been creating. To accompany each image, a short devotional would be written. The art was inspired by the Word, and in turn, inspired new words.

I was asked to contribute five pieces of writing to the project. We had a list of one hundred verses and their accompanying images to choose from. Because this project was all about inspiration—word to art, art to word—I wanted to give some behind-the-scenes insight into each of my pieces.

When at our most vulnerable, we might look at the stars and think about how small the Earth really is. We’re just a tiny speck of dust amid billions of stars. Unrelenting, powerful forces of nature speed us along in a chaotic dance through the cosmos… 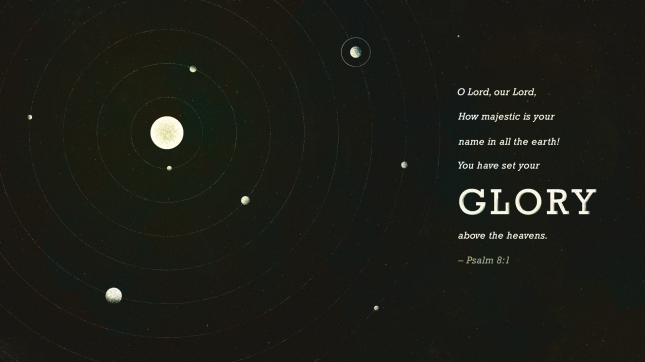 I wrote these pieces right after seeing Interstellar and writing this blog post. The imagery evoked in this piece of art struck the same emotional chords that the film had stirred up. The complex systems that govern the physical world are unfathomable and their creation can only be attributed to a higher power. In the grand scheme of things, we’re but a tiny speck amid a sea of black. I wanted to evoke those same feelings of smallness while still ending on an encouraging note. What is more encouraging than knowing the creator of this vast and chaotic sea desired a personal relationship with his creation.

There’s something deeply intimate about sharing a meal together, but coming together around a table to eat is so common that we often overlook its significance…

With Thanksgiving right around the corner, this devotional seems very apt. This is one of my favorite stories in the Bible. I love that Jesus simply wants to share a meal with his friends upon seeing them for the first time after his resurrection. Breakfast no less. One of the things I miss most about college is the shared meals I enjoyed. No matter what time of day, I could count on finding at least two or three people to eat with. I think that’s one of the reasons why those friendships are strongest, and will last the longest.

…Yes, sticks and stones may break our bones, but words can break our hearts…

The imagery in this piece was very striking—a razor edge to a speech bubble. I loved playing off that familiar school yard rhyme. My wife was actually the one who inspired this image of the heart, mind, and mouth all connected. I remembered a sermon she gave a few years ago and that circular connection between these three parts stuck with me ever since. I wasn’t very happy with the end of this one. After some fun wordplay and an image that drew you deeper into the idea, I felt like it ended with a whimper. If only I had a few hundred more words.

Every day we’re bombarded by things vying for our attention. Even our best attempts to focus on the things that matter are drowned out by the cacophony surrounding us, a roar as loud as a lion… 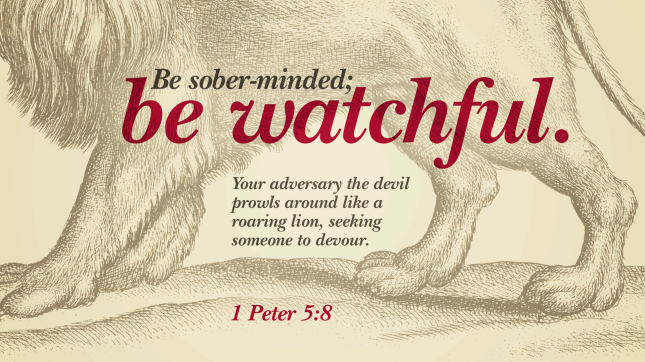 Entirely by coincidence, I happened to choose the only two verses with references to lions in them. As a symbol, lions have a wealth of concepts associated with them. For this verse, the lion was a hunter, dangerous and relentless. There are no natural predators we have to worry about today so I chose to focus on the man-made dangers that prowl our society. In the end, I allude to the encouragement Peter gives just a few verses later to combat these ills.

The second of my two lion verses, this one takes the opposite approach to the lion as a symbol—the regal, majestic creature at the head of the animal kingdom. Too often, Revelation is portrayed as a wild, prophetic end to the biblical story. Yes, it can be weird at times, but it’s also an incredible vision of victory and celebration. I wanted to shout those feelings of victory to drown out everything else. And I couldn’t help but slip in a reference to the most famous messianic lion in literature.

The first print run of Picturing Scripture is currently being funded on Kickstarter. See how art and word paired together can inspire your devotional life.